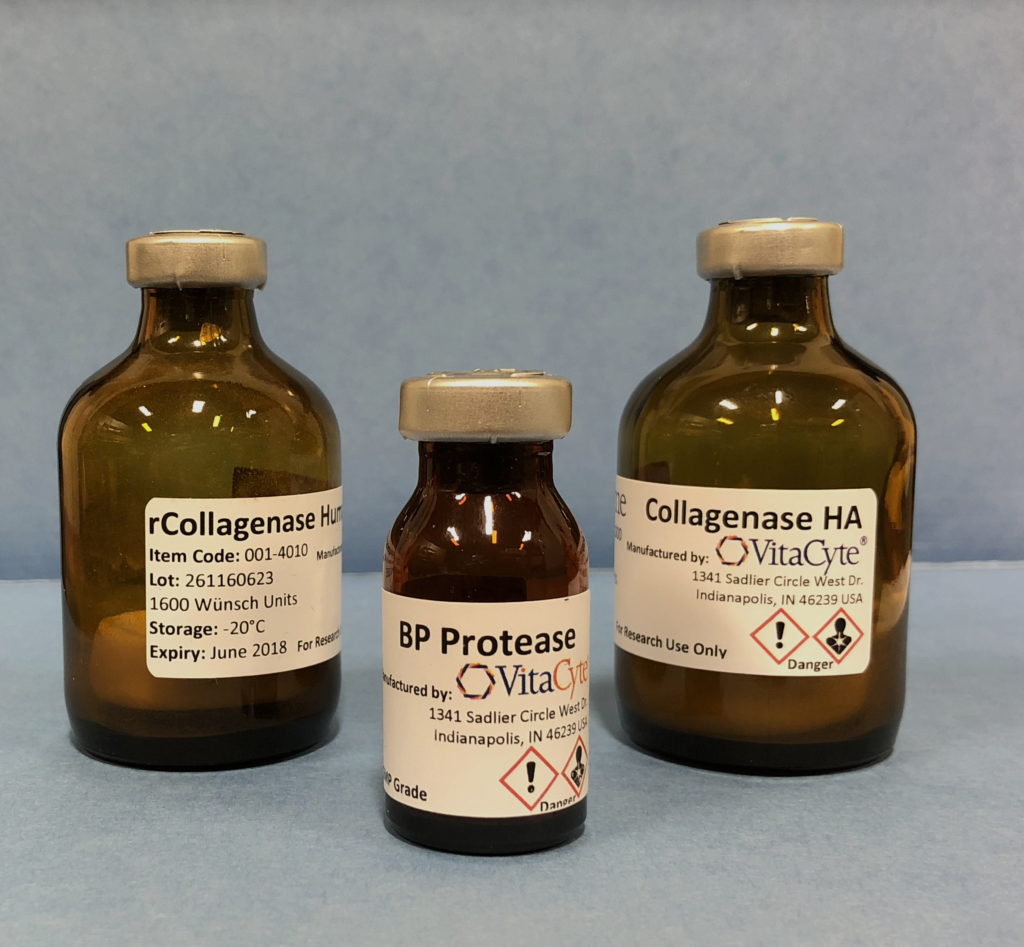 The introduction of Liberase™ HI Purified Enzyme Blend in 1994 to improve the consistency of enzymes used to recover human pancreatic islets for subsequent transplantation contributed to the growth of clinical islet transplantation.(1)  Liberase™ HI set a benchmark for comparing the performance of all subsequent products used for this application.(2, 3) A series of reports by Balamurugan et al., provided deeper insights into the enzyme compositions required to increase human islet yields.(3-6) The first two reports showed the importance of intact class I (C1) collagenase and the appropriate neutral protease enzyme for isolating human islets.(3, 4)  In 2016, they reported that a wide range of purified, recombinant C1 to class II (C2) collagenase mixed with a fixed dose of BP Protease, gave high islet yields (≈ 5000 IEQ/g pancreas).(5) Their most recent publication in American Journal of Transplantation(6) presents data that supports and extends these earlier observations by showing:

This blog post reviews the key findings above and comments on their implications to improve the yield of functional human islets used for subsequent transplantation.

Recombinant Collagenase is a Superior Enzyme for Human Islet Isolation

All isolations in this report(6) used a fixed amount of BP Protease activity per g trimmed pancreas (23,400 neutral protease units) that enabled direct comparison of the effectiveness of different doses of purified, natural or recombinant Clostridium histolyticum collagenase to isolate human islets. The results from these isolations compared islet yields isolated with a low (12 Wunsch units – WU) or high (20 WU) dose of collagenase per g pancreas. These data are summarized below:

The enzyme mixtures used for these isolations had different C1:C2 ratios. The 60:40 C1:C2 ratio used for purified, natural collagenase enzyme product (VitaCyte’s CIzyme Collagenase HA) was comparable to those used in Liberase™ HI. In contrast, recombinant collagenase contained a 30:70 C1:C2 ratio. This difference was unlikely to impact islet yields for two reasons. Similar human islet yields (≈ 5000 IEQ/g pancreas) were obtained when recombinant C1:C2 at ratios of 55:45, 43:57, 38:62, and 27:73 mixed with a fixed dose of BP Protease activity (23,400 NP U/g pancreas) were used to isolate islets from the body-tail of a human pancreas.(5) The 30:70 C1:C2 mixture used for islet isolation contained about 40% of the amount typically used for natural collagenase isolation.

The reasons for the difference in the effectiveness are unknown since there are only minor changes in the amino acid sequence between these two enzyme preparations:  4 and 13 amino acid differences for C1 and C2, respectively.(5) One conclusion from these results is not all sources of collagenase are equivalent. These results are in contrast to those in an earlier report evaluating the effectiveness of recombinant collagenase. Here, the effectiveness of purified recombinant or natural collagenase 60:40 C1:C2 mixtures combined with the same dose of thermolysin used in Liberase™ HI were compared for their efficiency to isolate human islets. The only significant difference between the two groups was the higher islet index (i.e., IEQ/islet number) obtained when recombinant collagenase-thermolysin was used to isolate islets.(7)

Earlier reports indicated the superiority of using a “milder” neutral protease (C. histolyticum neutral protease, Nordmark-Serva NB Protease) in place of the stronger thermolysin enzyme used in the Liberase™ HI formulation.(4)  Balamurugan, et al., directly compared human islets isolated from a split pancreas using a fixed collagenase dose (i.e., Collagenase HA) and optimal neutral protease activities. The only difference in these mixtures was the use of thermolysin or NB Protease. He termed the Collagenase HA-NB Protease mixture as the new enzyme mixture (NEM). The NEM gave significantly higher post purification islet yields and an increased percentage of islets with diameters > 200 μm than those islets isolated from the collagenase-thermolysin mixture.

Purified BP Protease (a Dispase™ equivalent enzyme) is purified from Paenibacillus polymyxa culture supernatants that do not contain any animal proteins. This protein belongs to the M4 protease family whose members include thermolysin and C. histolyticum neutral protease.(8) Although all members of this family have the same specificity for cleavage at the amino-terminal side of hydrophobic amino acids, they have different selectivity for different amino acids. For example, a study comparing the effectiveness of thermolysin or Dispase™ to remove epithelial cells from cryopreserved human amniotic membranes showed that each enzyme gave a different degradation pattern of the extracellular matrix proteins associated with this tissue as detected by immunohistochemical methods.(9) Treatment with Dispase™ eliminated staining of type VII collagen, laminin 5, and integrins a6 and b4 but retained staining of collagen type IV.  By contrast, there was no loss of staining of these proteins after treatment with thermolysin. The importance of citing this study is to show differences in the ability of each protease to digest extracellular matrix proteins for this specific biological material. This observation may or may not apply to similar studies since thermolysin and Dispase™ are routinely used to recover hepatocytes or islets from rodent or human tissue.

Comparison of the effectiveness of purified recombinant collagenase-BP protease enzyme mixtures or NEM to isolate islets from the body-tail of human pancreas are summarized below.(5) Both groups used equivalent amounts of neutral protease activity per g pancreas in the islet isolation process. The results from these isolations are summarized below.

The results from isolations using different amounts of recombinant C1 and C2 collagenase were aggregated together for two reasons. There was no difference in the performance of the four enzyme mixtures noted above to recover human islets. Moreover, the collagenase concentrations were below those used for islet isolation using natural, purified collagenase. The range in the mass of recombinant collagenase used in these isolations ranged from 2.09 to 3.75 mg/g tissue. In contrast, the Collagenase HA in the NEM contained about 4.5 mg/g pancreas.(5)

The results above show that the recombinant collagenase-BP Protease mixture gave a higher mean islet yield, but there was no statistically significant difference between these two groups.

The table below summarizes all the human islet isolations performed in the last two reports.(5, 6) All isolations used excess amounts of purified natural or recombinant collagenase combined with a fixed dose of BP Protease activity per g pancreas (23,400 NP U).

The average islet yield was approximately 5,000 IEQ/g pancreas after digest of 32 human research pancreata. There were no failed isolations.

Additional experiments determined the effect of pre-treating purified human islets with either low or high dose purified, recombinant collagenase or purified, natural collagenase for 30 min, to control blood glucose in nude mice. Here, pre-treated islets were implanted under the kidney capsule and challenged with high glucose and an intraperitoneal glucose tolerance test (IPGTT) performed by collecting blood over a 90 min period, followed by analysis of blood for glucose and insulin. These results showed that the sham-treated control gave the best glycemic control. However, comparison of IPGTT results from diabetic mice that received islets pretreated with low dose recombinant collagenase showed significantly better glycemic control and secreted a greater amount of insulin during the analysis period than other pretreated islet preparations (i.e., high dose recombinant, or low or high dose natural collagenase). (6)

The results from the two recent reports from Balamurugan and colleagues(5, 6) reinforces the general belief that enzyme composition and dose are critical process parameters for manufacturing human islets for clinical transplantation. These reports concluded that:

The implications of these conclusions indicate that dose-response curves should be performed to validate the purified collagenase and protease enzymes used in the islet isolation procedure.  Several independent lots of product should be used for validation to ensure the consistency of the results.