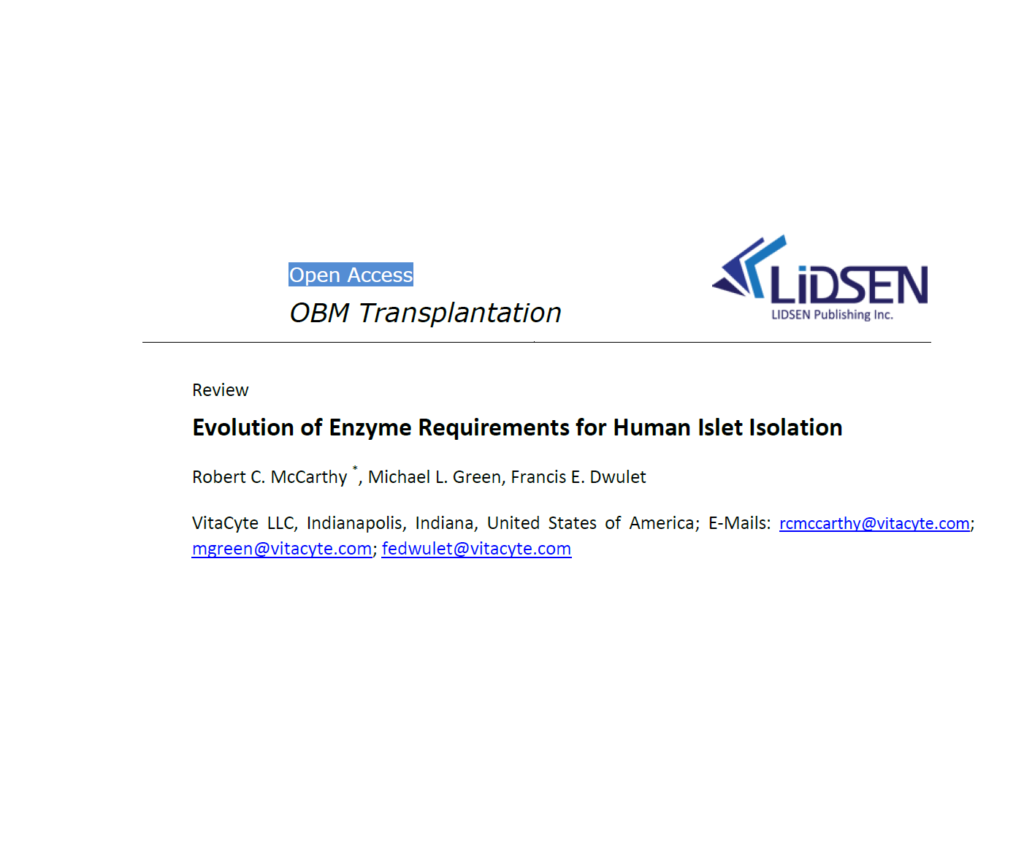 The quality of collagenase used for mammalian islet isolation has been a focus of clinical research scientists soon after Ballinger and Lacy demonstrated that islet transplantation could correct chemically induced diabetes in inbred strains of rats (1). Clostridium histolyticum collagenase became a critical reagent because of the need to isolate sufficient numbers of functional islets for islet transplantation in higher mammals (e.g., dogs, pigs, humans). Typically, researchers evaluated several “lots” of crude or enriched commercial collagenase products (i.e., traditional collagenase) for their ability to recover pancreatic islets. The goal of lot qualification was to identify a “good” lot of traditional collagenase that worked successfully in the islet isolation procedure before purchasing larger amounts of a specific lot of product for routine use. Good lots for human islet isolation were hard to find.

Camillo Ricordi’s development of a semi-automated method for human islet isolation led him to focus on screening new collagenase lots once these lots were released for sale by a supplier.  During this process, Ricordi screened lots of Collagenase P, a crude collagenase product first sold by Boehringer Mannheim Biochemicals in 1990.  He found that this material worked better for this application than competitive collagenase products. One lot, lot 9, was used to isolate islets for many allo-islet transplantation procedures (2). Collagenase P had higher collagenase and lower protease activity than found in Sigma collagenase products used by many research scientists at that time.

Ricordi’s use of the Collagenase P product in clinical trials led to a meeting with R&D management at Boehringer Mannheim Diagnostics in Indianapolis, Indiana about Boehringer solving the “collagenase problem.” This discussion led to funding of a research project at Boehringer Mannheim Biochemicals to identify and purify the key enzymes in crude collagenase responsible for releasing islets from porcine or human pancreatic tissue. The assumption was that the identification, purification, and formulation of purified enzymes used at an appropriate dose would resolve the collagenase problem.

The project started at the end of 1992 and led to the launch of the Liberaseä Purified Enzyme Blend product (later renamed Liberase HI) in November 1994. The original Liberase HI was a collagenase-protease enzyme mixture composed of 1600 Wunsch Units of collagenase and 7,000 BAEE U of clostripain purified from C. histolyticum culture supernatants, and 7 mg of purified thermolysin. Liberase HI was the primary enzyme used for human islet isolation from 1994 to 2008. Three additional versions of this product were used at defined intervals during this period.

In 2000, Shapiro and colleagues published a report that showed all seven adult type I diabetic patients with a clinical history of hypoglycemic unawareness did not require insulin one year after transplanting purified human islets into their liver via the portal vein (3). Liberase HI was used to isolate the human islets used in this trial. Edmonton’s success led to increased funding for human allo-islet transplantation. In October 2004, NIH sponsored a Clinical Islet Transplantation Consortium (CITC) clinical trial that led to the establishment of isolation laboratories that manufactured human islets compliant with GMP guidelines. These laboratories generated purified human islets used in several different clinical trials designed to assess the effectiveness of islet transplantation to manage adult type 1 diabetes patients. The results from manufacturing human islets and clinical outcomes from the CIT-07 trial were published recently (4, 5).

An unrecognized observation from the CITC trial was the association of collagenase biochemistry with human islet yield. In March 2007, NIH forbade the use of Liberase HI for preparing human islets for subsequent transplantation in the CITC trial because of the potential threat of transmission of spongiform encephalopathy (TSE) (6). Nordmark’s purified collagenase and neutral protease enzymes were used in place of Liberase HI. The animal-derived peptones used in Nordmark’s C. histolyticum fermentation procedure were pre-treated to minimize the TSE risk. However, the inability of several experienced islet transplant centers to recover sufficient numbers of islets for subsequent transplantation (7-10) led the CITC to adopt purified enzymes manufactured by VitaCyte and Roche for use in the trial. Although this modification was warranted, it reflected the naivety of collagenase manufacturer’s and the clinical research community of the association of key biochemical characteristics of collagenase and proteases to the recovery of functional islets from human pancreas.

Several years earlier, Barnett and colleagues at the University of Alberta showed that degradation of C. histolyticum class I collagenase was associated with lower human islet yields (11). Balamurgan and colleagues at the University of Minnesota confirmed this observation when they showed higher islet yields and a higher percentage of islet preparations were transplanted when enzyme mixtures used to isolate islets had a higher percentage of intact class I collagenase (9). A subsequent study confirmed this observation and also showed the superiority of C. histolyticum neutral protease over thermolysin for human islet isolation (10).

The studies cited above set a foundation for associating the biochemical characteristics of collagenase to their effectiveness in recovering islets from human pancreatic tissue. Subsequent reports have extended Balamurugan et al. observations. These reports are summarized in a recent review “Evolution of enzyme requirements for human islet isolation” by RC McCarthy, ML Green, and FE Dwulet (12). This report reviews recent publications, linking the effect of the biochemical characteristics of natural collagenase, recombinant collagenase, or neutral protease to human islet yield and function.

This open-access review article is published in a special issue of OBM Transplantation: Current Advancement of Islet Cell Transplantation in the Treatment of Diabetes Mellitus. The review begins with changes in the Liberase HI formulations from 1994 to 2007 and ends with future directions for research to increase the cost-effectiveness of human islet isolation for allo-islet transplant.